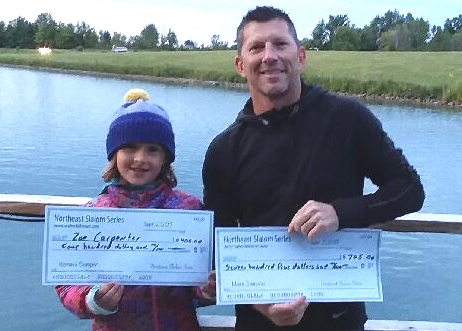 The 2017 Avon Self Storage Northeast Slalom Series (NESS) concluded Saturday at Pangaea Puddle in Canajoharie, N.Y., with Zoe Carpenter and Scott Bellefeuille claiming the Women’s and Men’s titles, respectively, and more than $1,000 in combined cash prizes.

No. 1 seed Zoe defeated 2016 Champion Skylar Hathorn in her first head-to-head pairing, then took out No. 2 seed Shannah Pochini in the finals to earn the victory. Skylar finished third. Ten-year old Zoe had a dominating 2017 NESS season, taking first place in each stop she participated in, in addition to a strong performance in the finals. 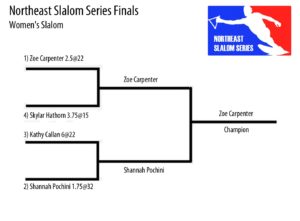 The story was a little different on the Men’s side as Scott, the No. 5 seed, emerged from the lower half of the seeds to score an upset win over a field of eight Men’s skiers. Scott topped No. 4 seed Will Bruzzese in the quarterfinals, top seed Bruce Epstein in the semifinals and No. 6 seed Justin Campfield in the final head-to-head round. Dan Warner was third.

The Avon Self Storage Northeast Slalom Series (NESS) is a seven-stop, five-state tour featuring a season-long points chase culminating in a cash-prize, head-to-head finals. Skiers earn series points at each stop in the series’ season, with those in the top 50 percent of the points standings at the end of the year earning an invite to the finals. 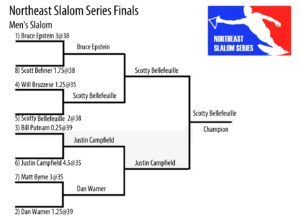