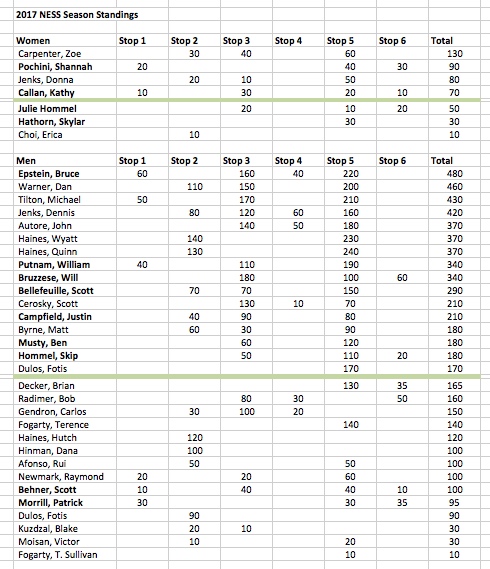 CLICK TO ENLARGE. The green line represents the finals qualifying cut off after six stops. Bolded skiers are registered for this weekend’s tournament in VT, thus have the chance to improve their standings.

With only one stop remaining before the Sept. 2nd finals, the Avon Self Storage Northeast Slalom Series’ season standings have begun to solidify, with a number of skiers safe enough to make plans for Labor Day weekend.

Heading into the final stop – the Tom Costello/Alan Rossi VT Championships this weekend in Vermont – 12 of the 16 spots in the Men’s head-to-head finals have been mathematically secured, while two of the Women’s four spots in the finals have.  Click here for the season standings after six stops.

Registration for the NESS head-to-head finals is open and finalists are encouraged to register asap. Finalists and will ski two rounds under normal class C conditions, while the head-to-head brackets will begin with the tournament’s third round. Only the first head-to-head bracket for each skier will go into the scorebook. For more information about the finals, click here and scroll down to “Series Championships.”

Last weekend at Dubes, Shannah Pochini used a win on the Women’s side safely vault herself into the finals, while on the Mens side Will Bruzzese continued to impress and put himself well clear of the finals cut off. See series results from Dubes here.