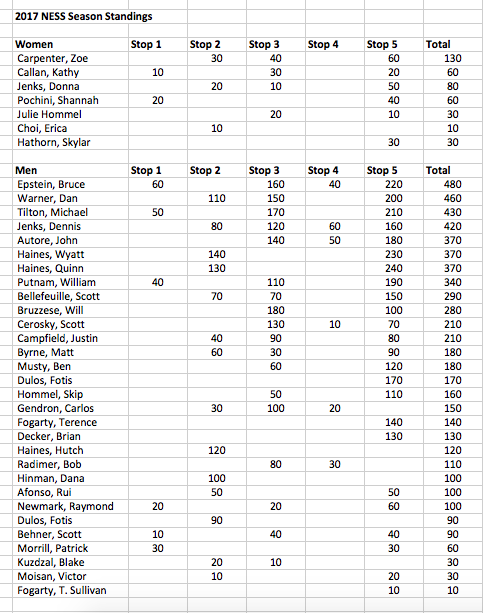 Northeast Slalom Series stops John’s Lake 115 (results) and the Eastern Regional Championships (results) are now in the books, leaving only two stops to decide the qualifiers for the Sept. 2nd head-to-head finals at Pangaea.

On the Men’s side, Bruce Epstein used strong showings at both John’s Lake and Regionals to pull ahead of Dan Warner, with Michael Tilton and Dennis Jenks close behind. With a field of 30 Men’s skiers, the top-50 percent cut-off for the finals is 15th place, which is currently held down by Fotis Dulos. The Vermont contingent of Ben Musty and Justin Campfield are a mere ten points ahead of him, while Skip Hommel is only 10 points behind.

On the Women’s side Zoe Carpenter has pretty much sewn up the No. 1 seed in the finals with 130 series point to date. Her nearest competitor is Donna Jenks with 80. Kathy Callan, Shannah Pochini, Julie Hommel and defending champion Skylar Hathorn are all battling it out for what will likely be only two additional spots in the finals.

Only two NESS stops remain until the finals field is determined – Aug. 19th at Dubes and Aug. 26th at Wrightsville.